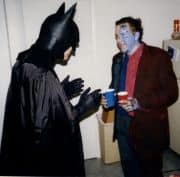 Thomas Mumme has been a freelancer in the Film/TV business for 20 years.  He has been determined to learn all aspects of production and has worked professionally as a Producer, Director, DP, Camera Op, First AD, Audio Tech, Editor and a whole lot more. Striving to become as well-rounded as he possibly can be, he has racked up credits on feature films; including RACE TO SPACE, THE DEVIL’S OWN and MEN IN BLACK; television shows and companies including AMC, CBS, MTV, VH-1, ESPN, Oprah, Emeril, Woodstock ‘99, & M. Night Shyamalan’s Signs of Fear for ABC. In 1999, Mumme won an Emmy for his work on The John Glenn Launch. Most recently, he has been working on reality TV shows such as Comic Book Men, Survivor, Celebrity Apprentice, Ghost Hunters International, Tabatha’s Salon Takeover, Kitchen Nightmares, MSNBC’s Lockup & SPIKE’s Pros Vs. Joes, just to name a few.

In 2005, he formed Blue Juice Films, Inc. alongside Michael Misconi, Adam Miller, and Jeremy Schneider.  The company has produced several award-winning short films and music videos and has several feature film scripts and television shows in development.  Striving to be a part of every aspect of storytelling, they formed Blue Juice Comics.

According to his bio picture, he is currently negotiating peace between Two Face and his drinking buddy Batman.